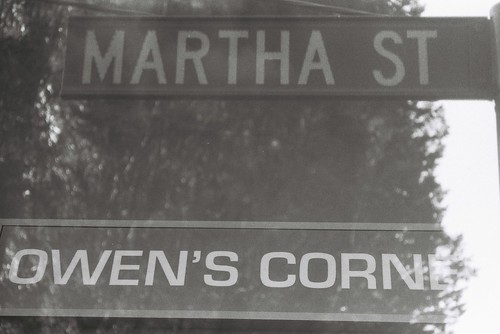 I’m not worried about likes or comments on this one, but I would appreciate if people could read this, especially as its a fairly long post.

There are two streets near where I live. Owen Street (now Owen’s Corner) in Mittagong, & Martha Street, in Bowral.

I did a multiple exposure of these signs as a tribute to the late Owen Hart, who passed away trying to do a stunt that went horrible wrong on the 23rd of May 1999. Owen was a beloved wrestler from the Canadian Hart Family, all famous for wrestlers, & he was working for the WWE (WWF at the time), when he died.

I was 11 going on 12 at the time, & I remember going to school & being told about it. I was so shocked that it was all I could think about. I liked Owen, but he wasn’t one of my favourites (I was more into wrestlers like The Rock, nWo etc).

Owen met his wife Martha while they were in high school in the early 80’s, & they were together when he died. They had two children together.

What is important for me in this post is that for years, going back as far as at least 2006, I have seen horrible & vile attacks towards Martha by wrestling fans & I am sick of it.

Martha is adamant that the WWE not profit off of her dead husband, which is perfectly justified due to how they were extremely negligent in his death, & the way she had been treated afterwards.

Back in the late 90’s there was a huge ratings war between the WWF & the now defunct WCW. One of WCW’s top stars, Sting, had entered the ring by descending from the ceiling.

He had done it before, but these times he was using proper safety carabiner harnesses, but releasing himself proved to be too slow for their liking.

The idea for the Over the Edge pay-per-view (where he died infront of a live audience), was for Owen to release himself shortly before landing, & stumbling on the ground like a fool to mock Sting.

As real safety harnesses take time to release, this was not good enough for the WWE. They insisted he use a $68 sail boat harness with a very sensitive quick release trigger mechanism NOT designed for men to descend from heights. It was this trigger release mechanism that held him up, & it is believed he fell to his death while trying to adjust his cape (it was very dark up in the rafters).

The harness functioned perfectly as designed. It was NOT a malfunctioning harness as wrestling fans claim. The WWE approached several professional stunt co-ordinators to choreograph the stunt, but they refused, citing the extreme dangers.

Instead of scrapping the idea, the WWE insisted until they found someone that would choreograph it. They knew the dangers, but ignored them.

Martha has since received doctorates in Psychology & Sociology, graduating from Cambridge University, honoring her dead husband through the Owen Hart Foundation, which helps underprivileged kids get educational scholarships & help give people homes. She has had to raise two children on her own while doing all this, as well as putting up with crap from the WWE & her inlaws.

She has been honored for her philanthropy several times, & her foundation does yearly fundraisers with celebrity guests attending (names such as Robin Williams, Steve Martin, Martin Short & Ringo Starr for example), & she, along with her daughter, even went to Nepal after the earthquakes a few years ago representing the Foundationto help give aid to survivors.

She has strongly opposed the WWE using Owen’s likeness, which leads to so many vile comments from wrestling fans (some of which are the B word, the C word & wishing she was dead), even though the WWE have done things to justify her stance. She does not want them to profit off of Owen after they were horribly negligent & had zero regard for his safety.

A fair bit of this nonsense is due to Owen’s older brother Bret, complaining to the media how much of a terrible excuse for a human being Martha is, & wrestling fans believe his biased & hypocrisy as gospel, & then say these horrible things.

I’m sick of it. The WWE do not deserve to profit off Owen after they caused his death. After Martha settled her wrongful death lawsuit, they conveniently decided to sue the company that sold them the harness for the exact same amount.

Wrestling fans, & Bret like to spout off about how Martha is trying to erase Owen from existence, as if she is traveling in Doc Brown’s Delorean.

She is NOT trying to do so. She has allowed Owen to be in two of the Legends of Wrestling video games made by Acclaim with no association with the WWE, & she has said that she doesn’t have a problem with things like documentaries, but its the WWE doing them she has a problem with.

The WWE own all of the footage, & although they could give everything to her & tell her to release DVD’s & give the profits to charity, they refuse to do so, despite non-stop bragging about how charitable they are.

Bret conveniently not only ignores this, but he also has nothing to say when the WWE justify her stance. Her 2010 lawsuit focused on not receiving any royalties. Bret was quick to attack her, yet, when the WWE did admit to doing so, he was as quiet as a church mouse.

The WWE did put out a DVD on Owen in 2015 titled Hart of Gold (against Martha’s wishes). Bret came immediately out to attack Martha for "ruining" this DVD, claiming she was the reason there wasn’t any footage from Stampede Wrestling on there (his father’s promotion), even though there is.

On this DVD, the WWE claim that after the infamous Montreal Screwjob (I’m not going to get into it here), which Bret left the company on a humiliating note, Owen was happy to stay with them as it was just business.

The fact is, he wanted to leave to go to WCW, but they wouldn’t let him out of his contract. Owen was known for being a loyal man with integrity, & this DVD comprimised that just so the WWE wouldn’t look as bad & not open themselves up for more criticism again.

Bret said nothing about this, but he is always quick to attack Martha over the slightest thing.

Bret Hart demands Martha "get over it" yet, to this very day, he still complains about people he had catfights with over 20 years ago.

Bret also has more harsh words to say about Martha than the likes of his hero Tom Billington, Jimmy Snuka, or Chris Benoit.

Billington had for years, frequently beat his wife almost to death on a regular basis, including holding a shotgun to her head, which he justified by saying it wasn’t loaded.

Snuka beat his girlfriend to death back in 1983, but was never charged until 2015. The charges were dropped due to health issues. While he wasn’t convicted, he was still found liable 30 years ago in a civil suit, which he refused to pay, & had a record for violence against women.

Bret considers the acts of these individuals to be not as bad as Martha’s stance that the WWE not profit off of her dead husband.

He wants Owen to be in the WWE Hall of Fame (as do all these wrestling fans that say vile things about her), but this Hall of Fame is just an internet page motivated primarily by profit. There is no actual building you can visit, & people that get inducted sign contracts with certain obligations, such as giving likeness for merchandise.

She DID, however, allow last year a different Hall of Fame to induct Owen, but Bret never bothered to attend the event because he was "too busy" watching a UFC fight.

Bret has also belittled Martha’s qualifications as a psychologist for her stance. If she was so terrible like he claims, then she would not have graduated, so he is basically saying he is more of an expert than the professors at Cambridge University that gave her passing grades.

He claims that Owen would be disgusted with how she is handling his legacy, & he claims his "proof" is that Owen told him in a dream. If he is such the master psychologist that he claims to be, then he would know that the most obvious interpretation of his dream that his own resentment towards her manifested itself as Owen.

I am tired of people like Bret Hart lying, which encourages wrestling fans to say these horrible things. He once again attacked her in the media last year, but they also gave her a chance to defend herself.

Bret then went back to the media to respond to her defense, & he was complaining about the media focusing on this issue & not more important current events.

For years, Bret has complained to the media about Martha trying to intimidate her into letting the WWE profit off of her dead husband, but he has never once complained about them focusing on that issue. This time, they gave her a voice to defend herself, so he went berserk over it.

Bret knows full well that wrestling fans say such vile things about Martha, so he continues to lie & attack her to get fans to try to bully her into giving them what they want.

It is also sickening the way he places his own ego above everything that happened with Owen. He still complains about people that negatively affected his career, but demands Martha "get over it." He is saying that people that harmed his career is unforgivable, but Martha having to put up with being horribly treated by the WWE & having to raise two children on her own is forgivable.

Sorry for this long post, & I appreciate it if anyone has read this far, but I am tired of the avalanche of abuse Martha has had to put up with for years.

Learn the Secrets of Getting Traffic from Instagram ($197 value for FREE but only while they last!)
Exclusive Bonus:  Dream Car Contest
(Don't Miss This!)

BestBizLocal® Get the Buzz on the Best Local Businesses™

Want to be the Next MicroCap Millionaire?
(Don't Miss This!)